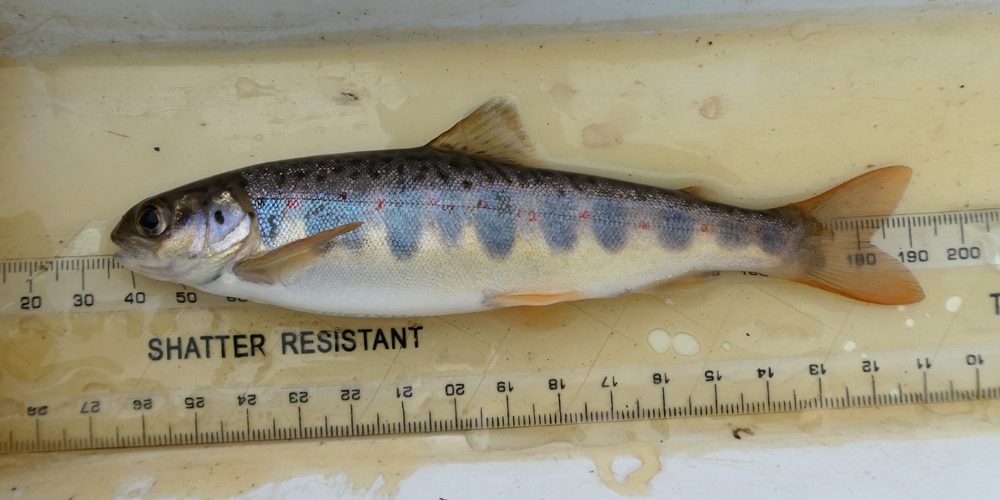 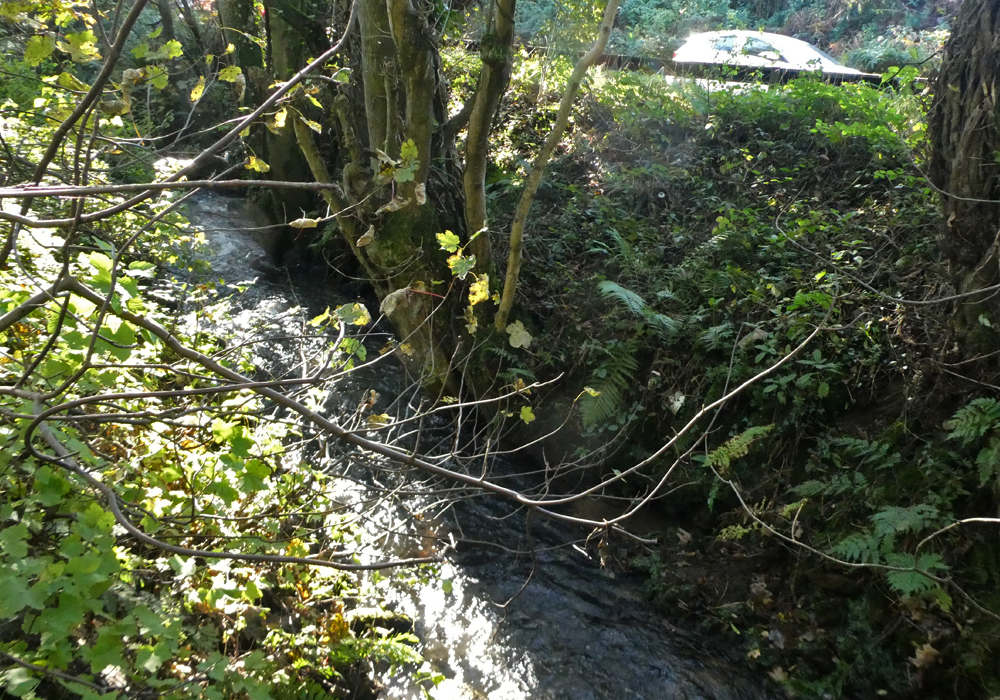 The Brockloch Burn is rather easily overlooked by most travellers as they head alongside it on the A77. It’s diminutive size may not be everyones idea of a salmon spawning burn but it does produce salmon when they can access it

Finally water levels have dropped back towards more fishable levels and today ART managed to perform 2 surveys on the Chapelton and Brockloch Burns within the Doon catchment. Both these burns have suffered from diffuse pollution issues in the past and the condition of the habitat has been poor for many years. Historic dredging, livestock poaching and enrichment are among the most damaging issues on these burns however over the last decade or more, the Board, FWAG , ART and SEPA have all put effort into encouraging improvements in agriculture practices as have the landowners. That said, we still see issues and this time last year, the poaching and sediment on the Brockloch was terrible. That has been addressed to some extent so when we revisited today, we didn’t expect to find much to write home about. 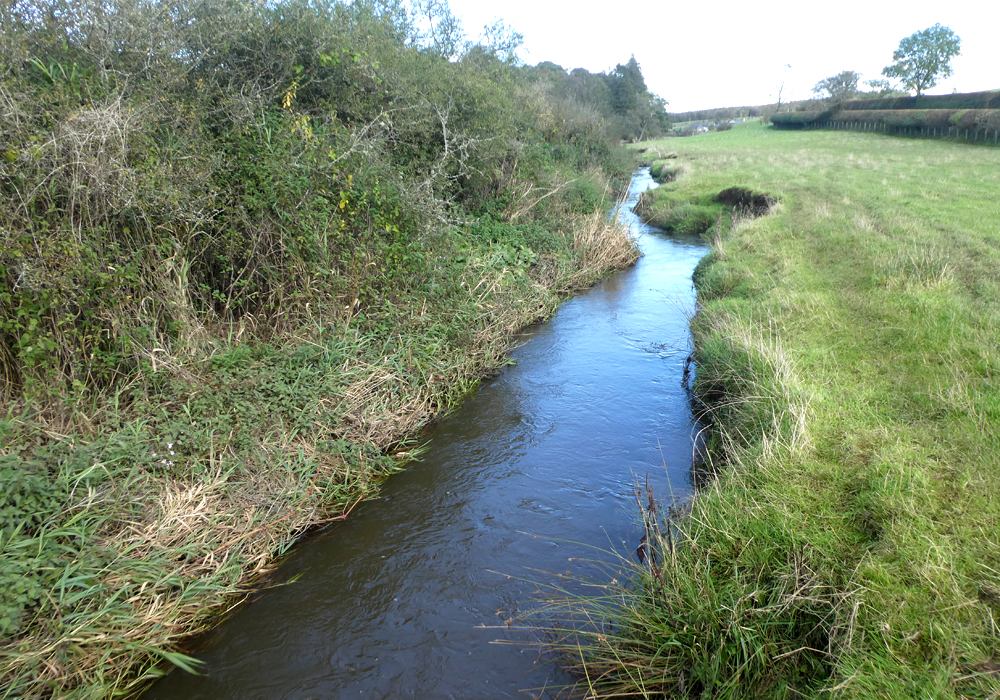 Historic straightening and dredging left the Chapelton burn over deep and prone to bank erosion. Diffuse pollution and silt are the two main limiting factors in this burn that used to be high productive for sea trout and a few salmon too. The burn is beginning to recover slowly but some issues remain and have yet to be addressed. Natural recovery will take decades but we hope to be able to speed this up

However, things have taken a slight upturn and we found both salmon and trout on Brockloch and Chapelton Burns and in what we can only describe as encouraging numbers (when compared to previous results on these burns). Livestock poaching has been reduced on the Brockloch through the addition of a scare fence. This reduces the silt entering the burn and smothering the bed substrates. Of course it also cuts the silt that reaches the Chapelton Burn too which lies downstream. Both burns still have silt issues but in time we hope to see further improvements. 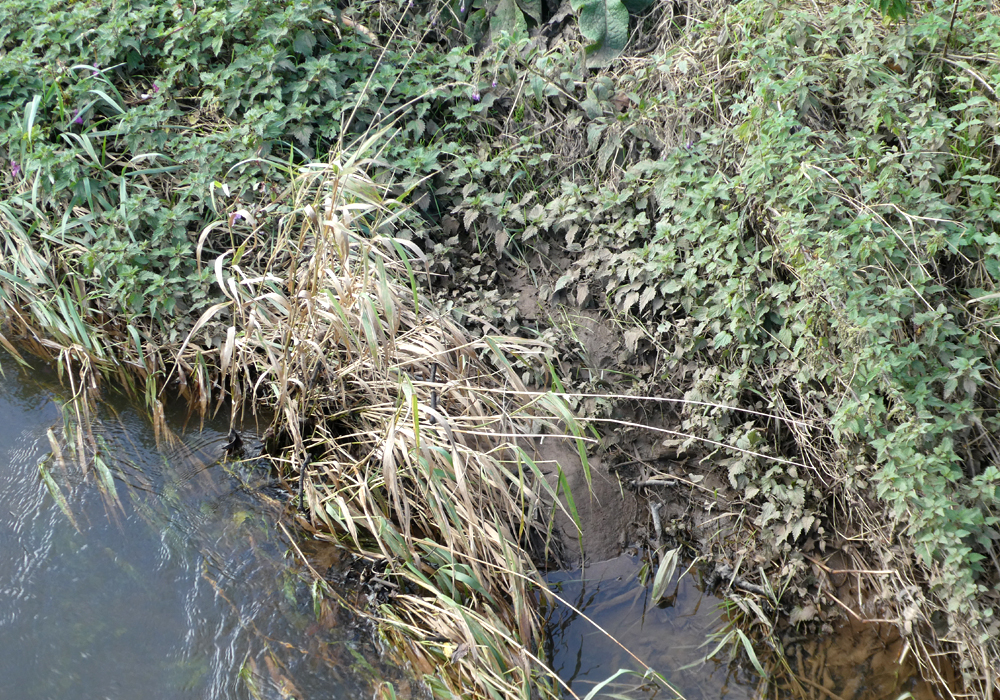 Silt in the burn remains a serious issue and after every spate, deposits such as this can be seen on the bankings. We have to find ways to remove this silt and stop further inputs if recovery is ever to be achieved

Another factor that affects migration into the Brockloch Burn are the road culverts which are prone to blocking. ART staff cleared these of debris at this time last year and again today. Ensuring that fish can reach their desired spawning locations is essential and the salmon fry that biologists found on the Brockloch  today are only there due to their efforts to clear debris last year. Every little helps when so few salmon are returning from the sea and opening up and improving freshwater habitat has to be the number one priority and the only real way to increase both distribution and number of fish in the system. ART staff still would like to find ways to clear the silt from these burns but apparently there is little enthusiasm from SEPA to allow gravel cleaning. 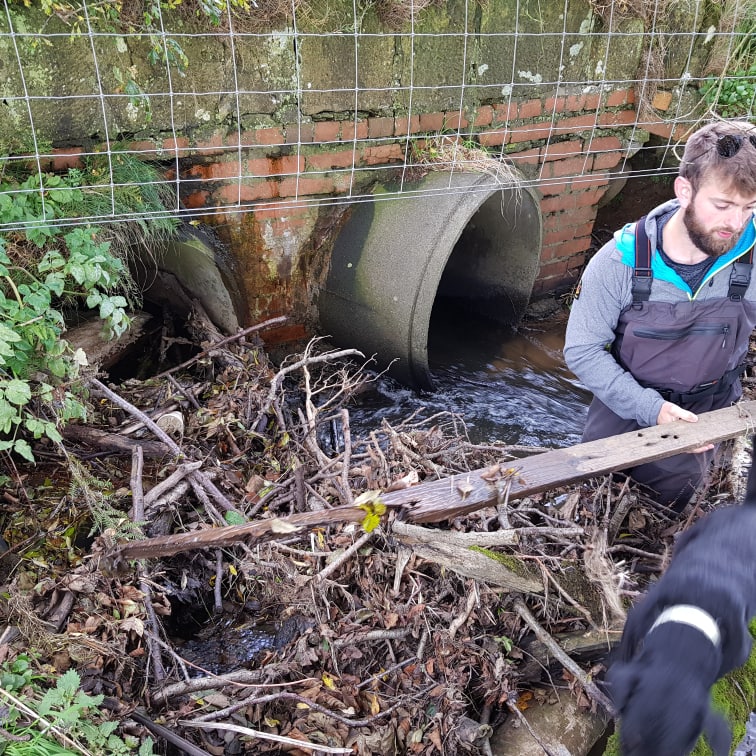 ART staff clearing timber and plastic waste from the culverts to allow trout and salmon to reach their spawning grounds in the Brockloch Burn. An additional improvement would be baffles within these culverts to help fish to make it through. We will recommend this to Ayrshire Roads Alliance and the DSFB at the next opportunity 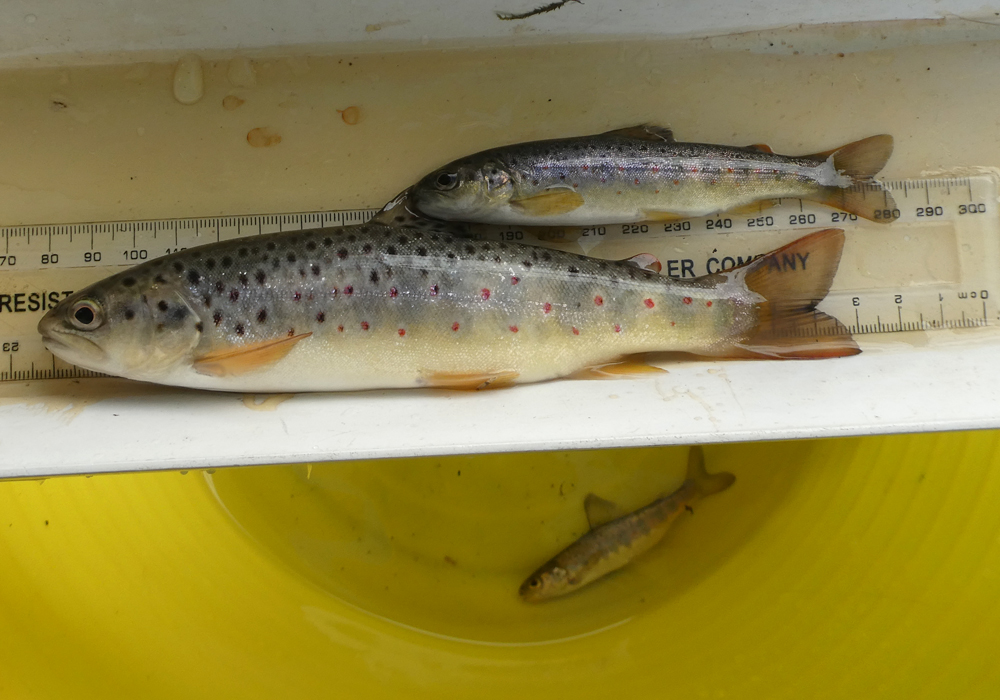 Salmon and trout captured in the Brockloch Burn today. It is also important for eels that are considered to be in decline across most of Europe and closer to home in Ayrshire too. 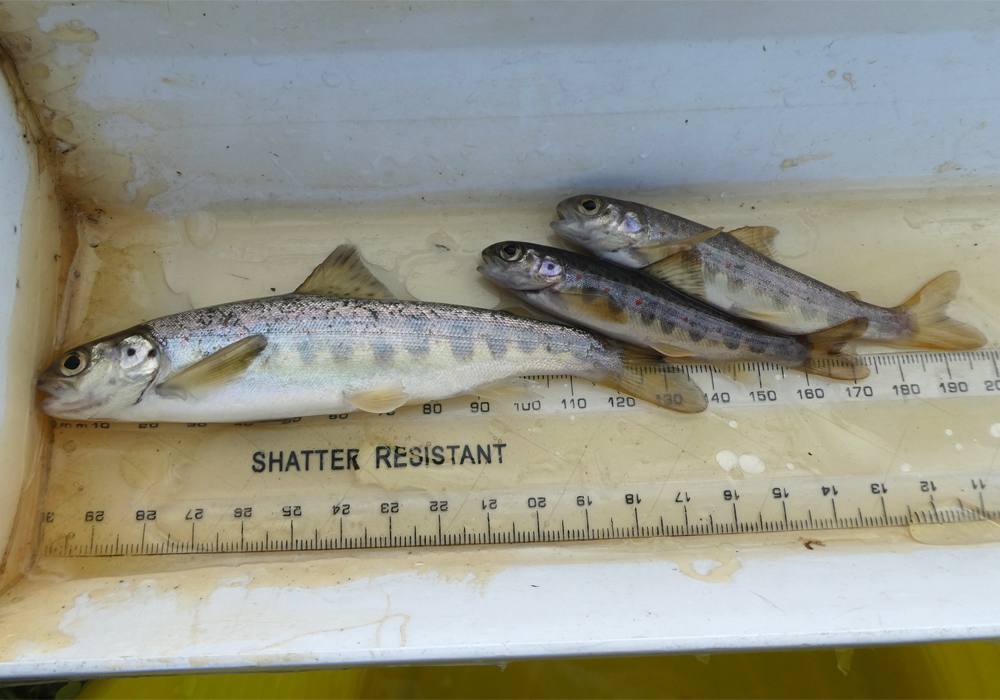 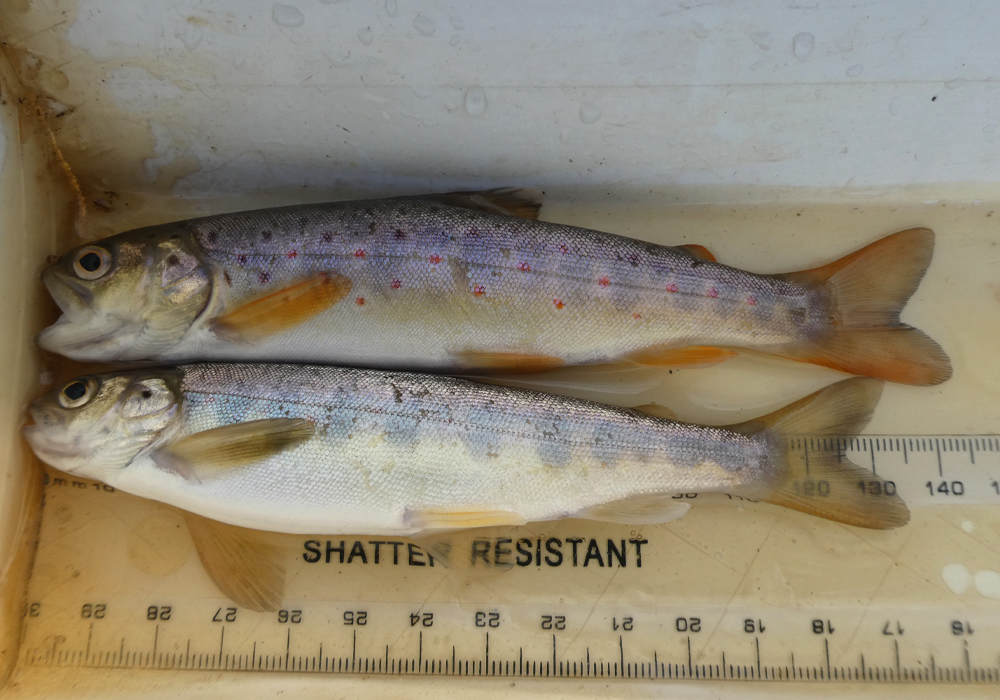 Salmon and a colourful trout from Chapelton Burn 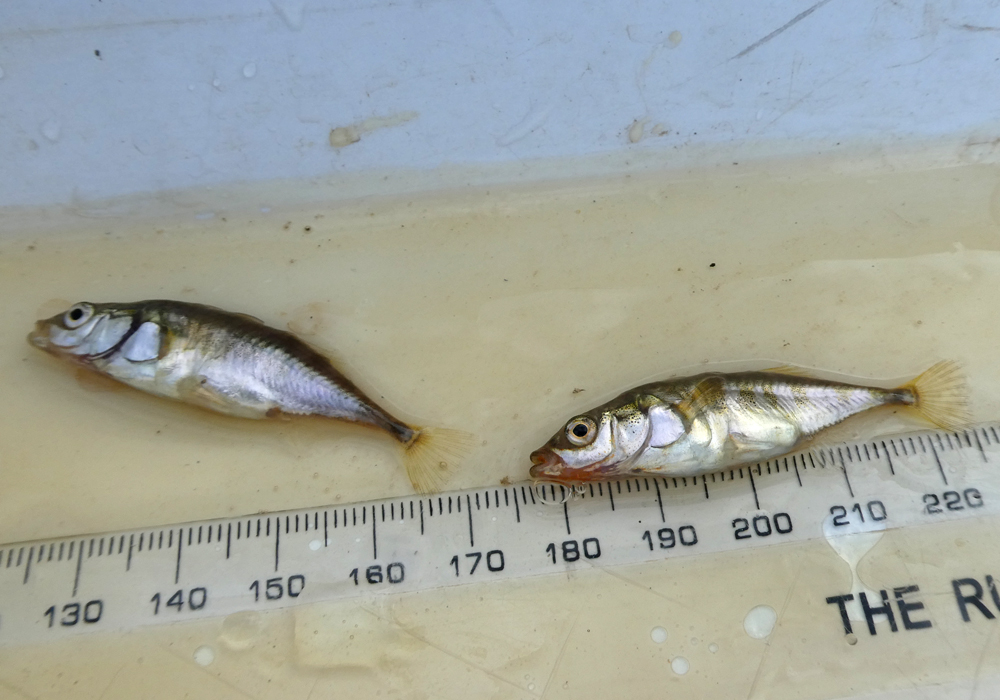 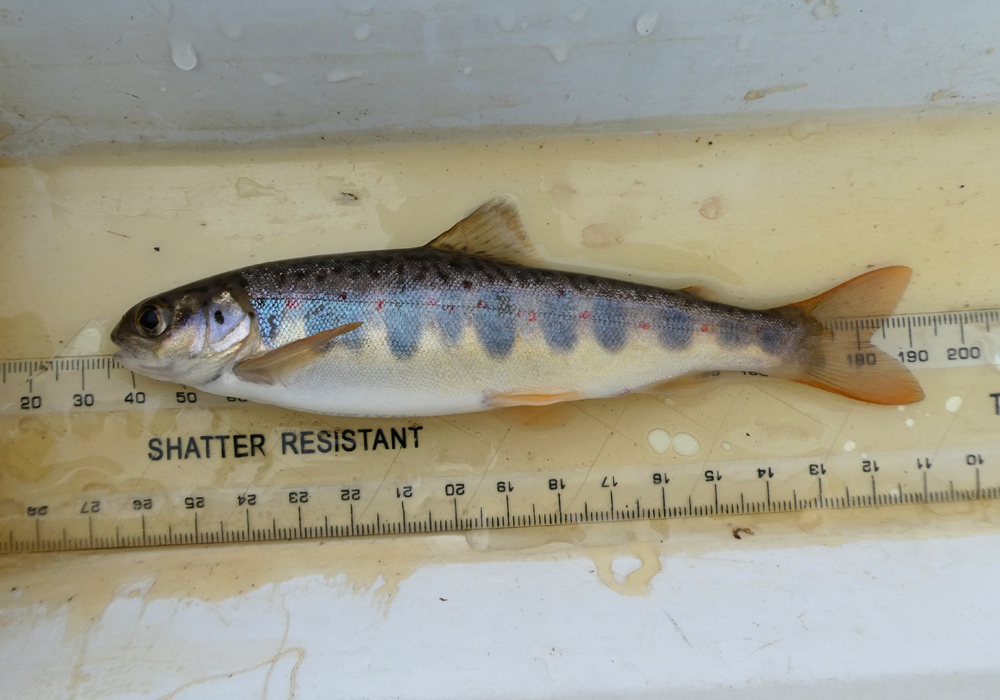 Today’s results are encouraging and especially so when the habitat is not yet in good condition. Comparing this burn to the Culroy a short distance downstream, the quality of habitat is night and day following the Board and ART’s investment on that tributary. Hopefully now that the Culroy is in good condition, we will soon see great improvements in salmon numbers spawning there.