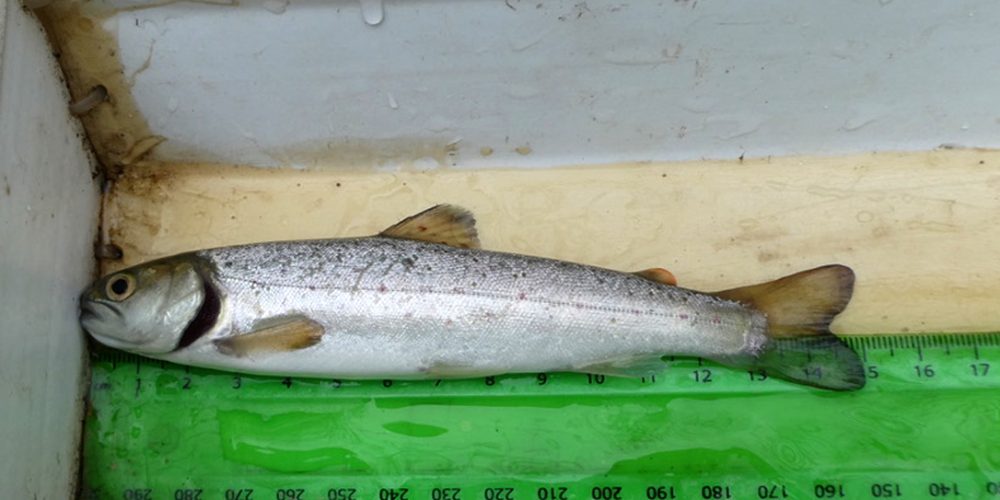 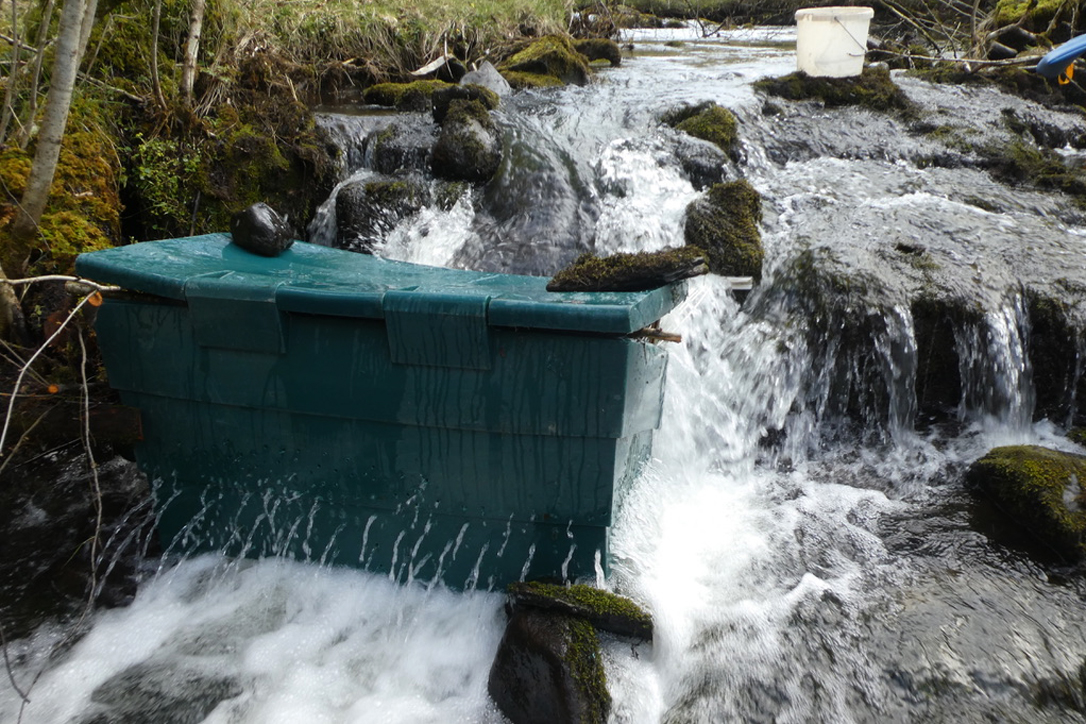 Our smolt trap box in the Cummock Burn 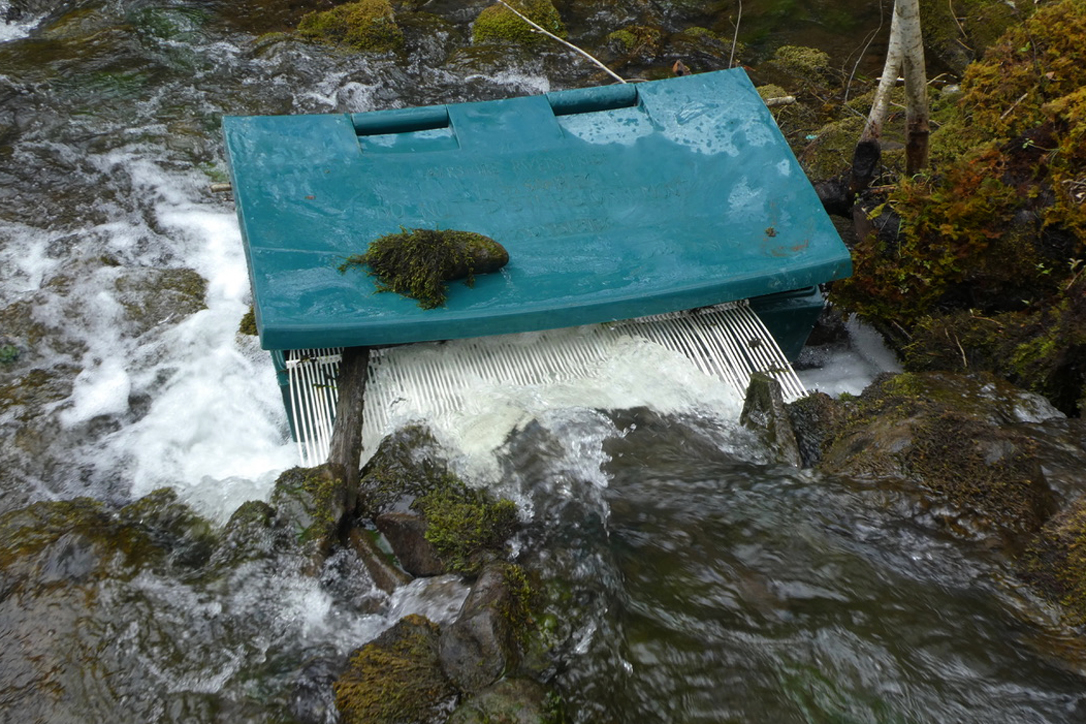 Another view showing the screen at the entrance to the holding box. Water drops through the screen and the fish roll into the box. The box is perforated and there’s adequate through flow to sustain fish

Ayrshire Rivers Trust staff have been monitoring smolt emigration from the Cummock Burn at Dalmellington in the last week or two for the DSFB. This is a considerable undertaking as we are required to check the trap daily but of course we don’t mind. The Cummock was stocked in 2018 and 2019 with alevins from the Doon hatchery. Few if any wild salmon spawned upstream of the falls in those years so we are really monitoring hatchery survival and health. We had planned to tag these smolts and count the losses as they descended the river but unfortunately this aspect of the project became impossible to deliver due to a shortfall in funding. It is a shame as it would have been beneficial to quantify losses to predators and natural attrition.

We stocked at recommended densities within the area and are expecting between 100 – 200 smolts to leave the burn. Around 10,000 alevins were stocked in 2019, some of which may have left last year (probably up to 25% of Doon smolts leave as S1s). Typical of salmon, the large majority of fry die before the end of their first winter so we can’t expect too many fish to remain in 2021 and this smolt run…. we consider 2% would be realistic but will be pleased to see more.  S2 smolts from the 2018 and S1 smolts from 2019 stocking will have left in 2020 so we missed them due to Covid.
The smolts we have trapped so far are all doing very well and their growth is incredible. We believe this is due to the enriched mine water entering the burn near the old Pennyvennie school site. Obviously it may impact on natural recruitment to some extent but the stocked smolts are thriving. Although we are only working with small numbers, bird predation doesn’t appear to be an issue yet as there hasn’t been any signs of beak marks.
However of concern is the large percentage of smolts showing deformities to the lower jaw. Undershot or overshot lower jaws are visible in a high percentage of smolts. This trait doesn’t affect trout so we are conscious that the problem is likely to have come via the hatchery broodstock, collection or rearing process. It seems very unlikely that water quality issues from the mine discharge could account for this but we will check everything w can to find out. Thee salmon  were stocked out as alevins still with a yolk sack. None the less, they seem to have grown on well despite their disabilities. We are researching this trait but it does appear to be a known phenomenon with aquaculture and hatchery fish. The photos below show the problem clearly. 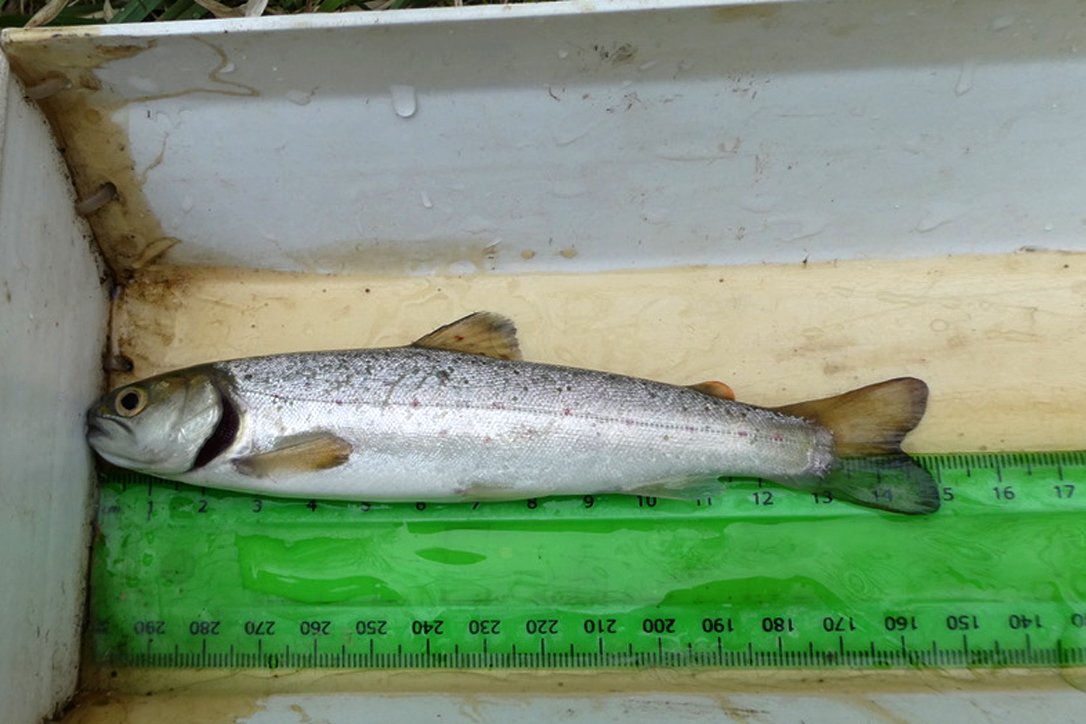 Encouragingly we found a trout smolt 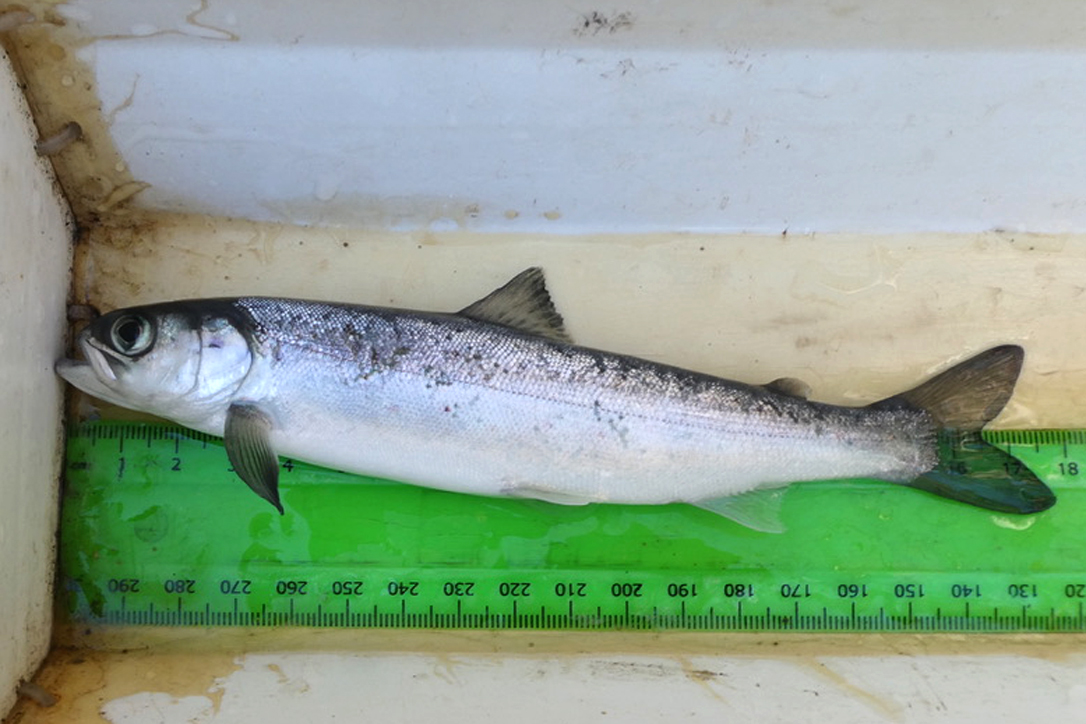 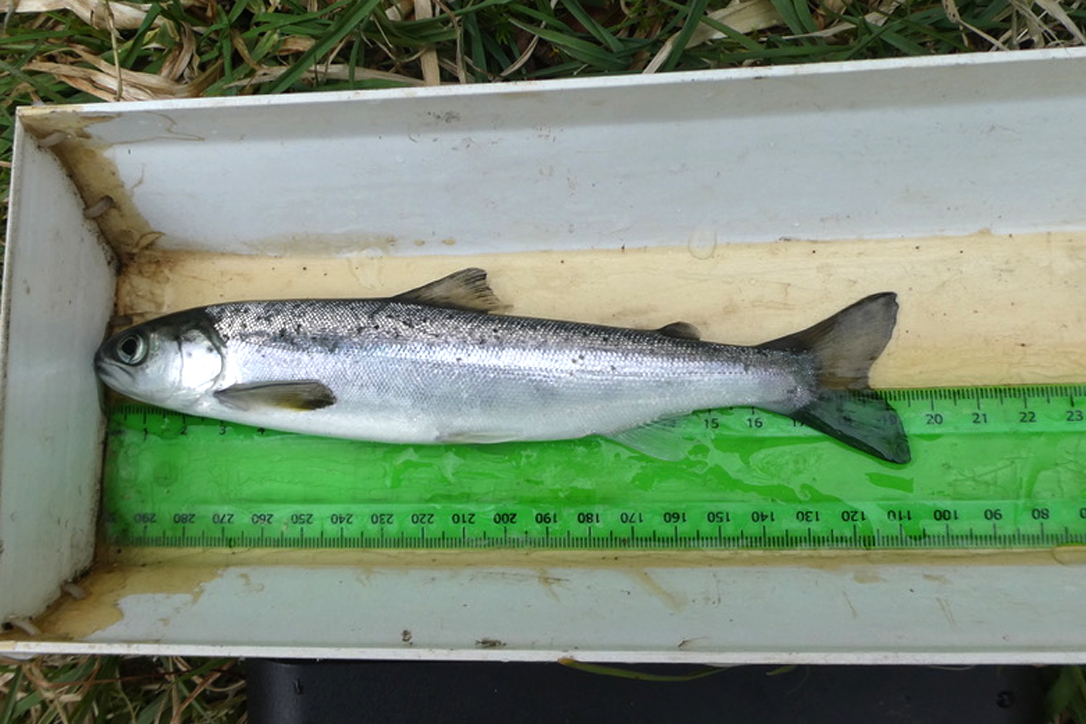 The first and only smolt so far that didn’t have any jaw deformities. It was the largest salmon smolt I think we have ever seen on the Doon at 186mm 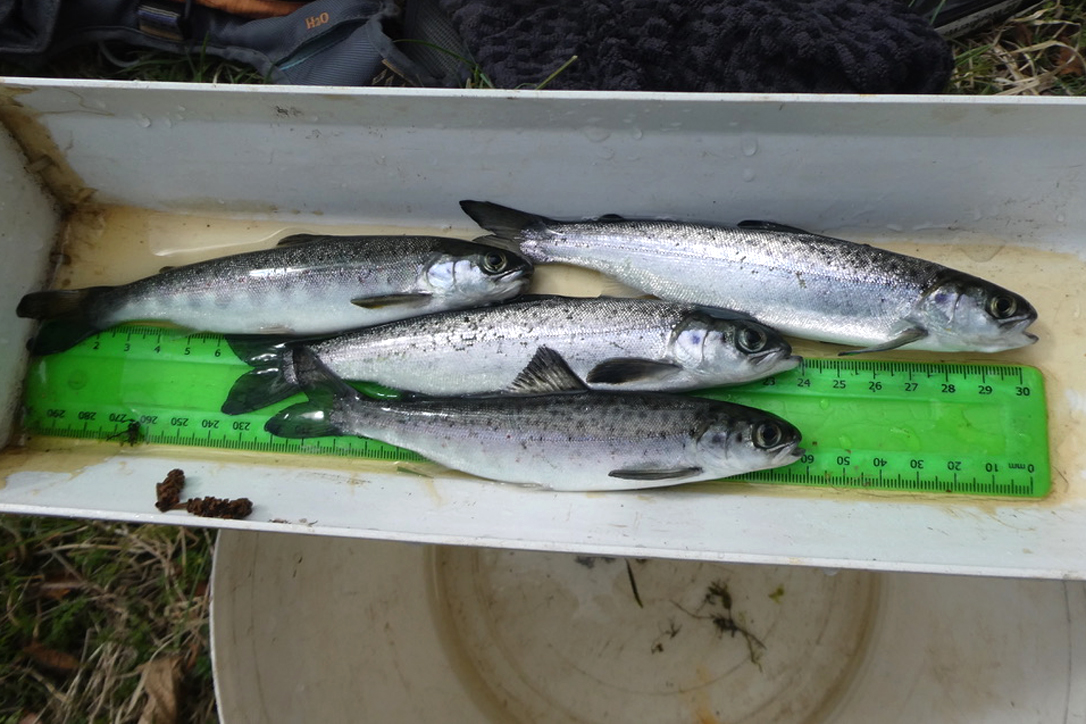 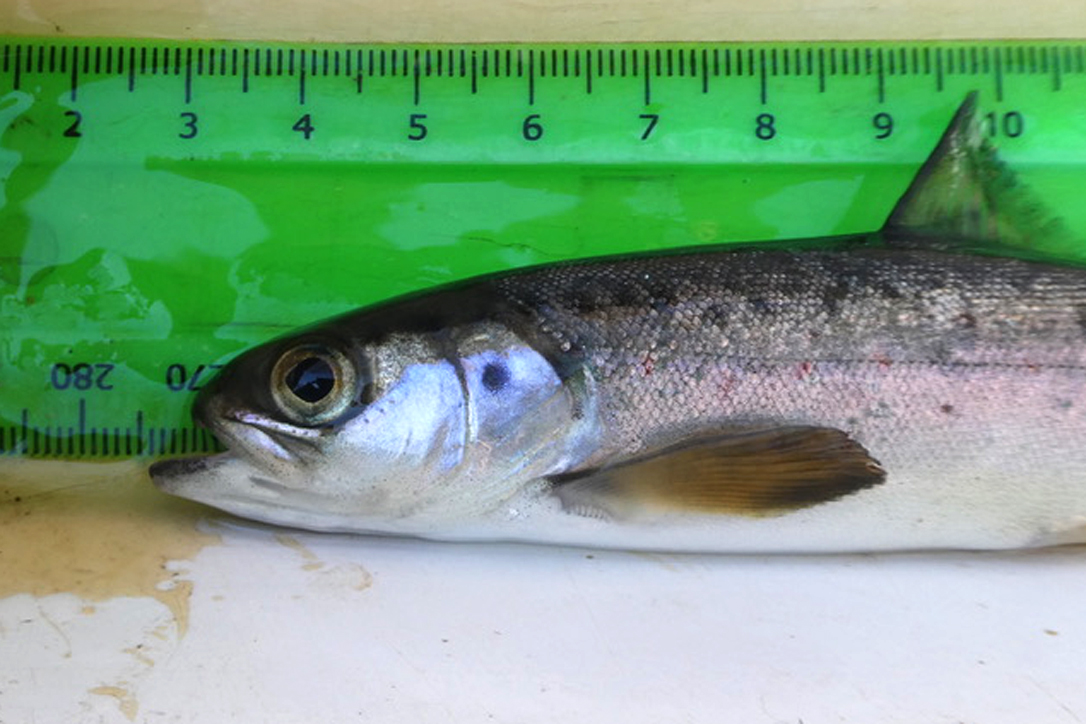 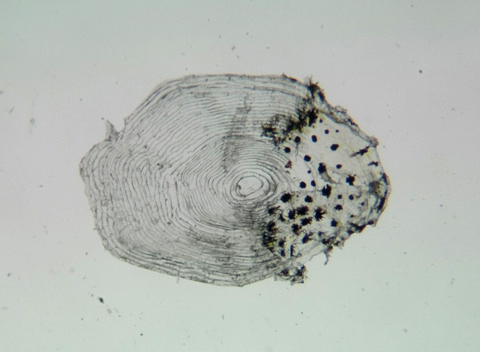 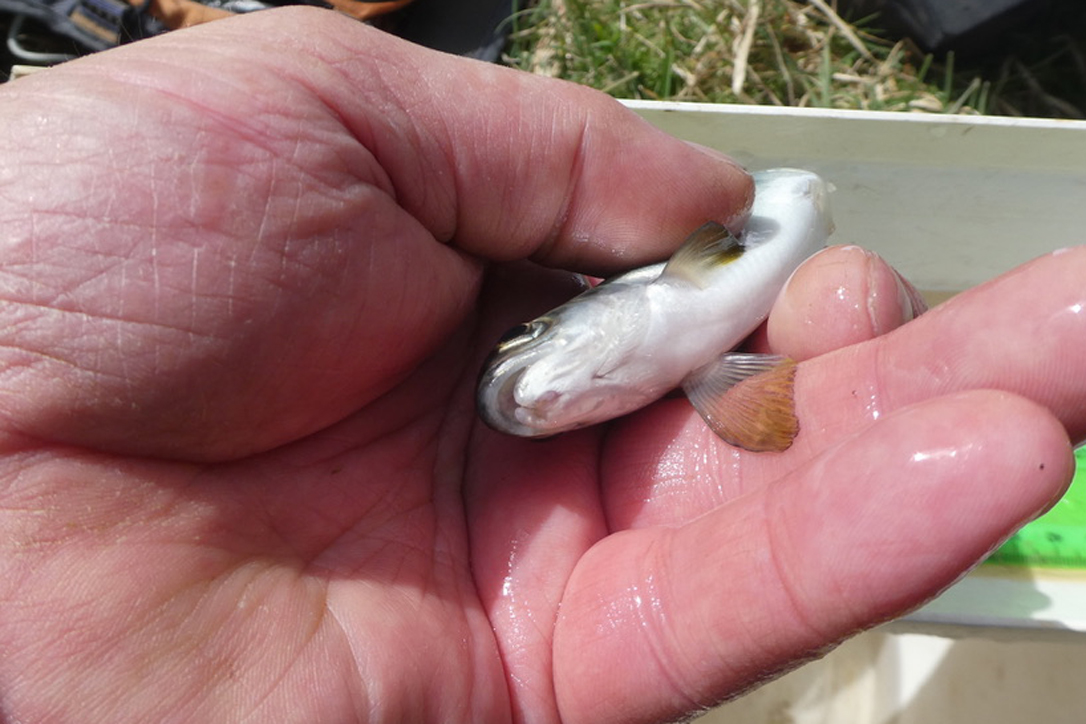 Another less obvious deformity on a stocked salmon smolt
In future, if we can get more wild fish into this burn, we expect to produce larger than average smolts from the Doon and that should mean better survival at sea. We will keep you posted as this project continues but without much rain, we don’t expect more than a few smolts each day.
River Doon District Salmon Fishery Board meeting March 2021 River Doon DSFB Meeting