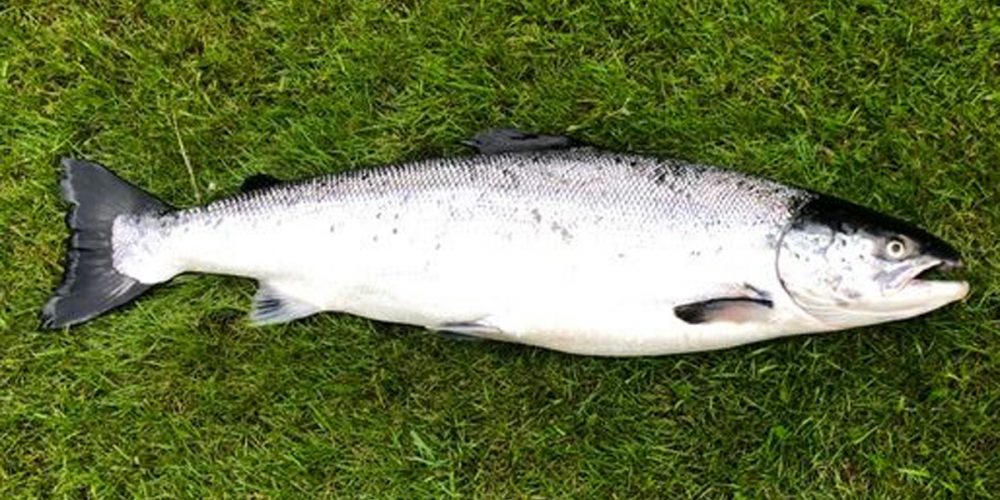 Ayrshire Rivers Trust received a video call today from an angler who had just caught a salmon on the Irvine that he thought may be a farmed fish escaped from Carradale 3 weeks ago. Impressed   by his ingenuity we  quickly were able to confirm that indeed this was an escaped farmed salmon and it should be killed.

We met him on the way back home to collect the fish as he didn’t want it. The condition of the fish was surprising and it was perhaps the best and healthiest looking  farmed salmon we’ve come across from any Ayrshire river ever. Apart from the dorsal damage, there were only subtle signs that gave it away. It looked better than any on the slab at Asda. 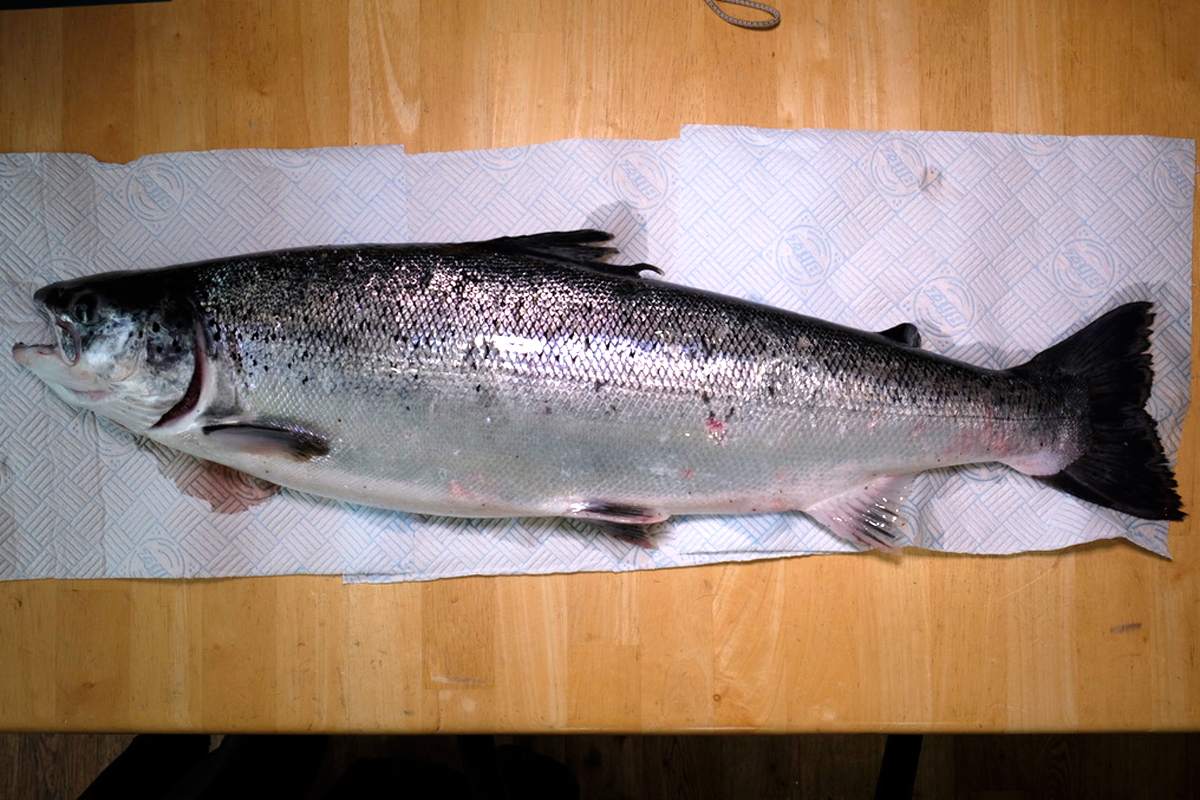 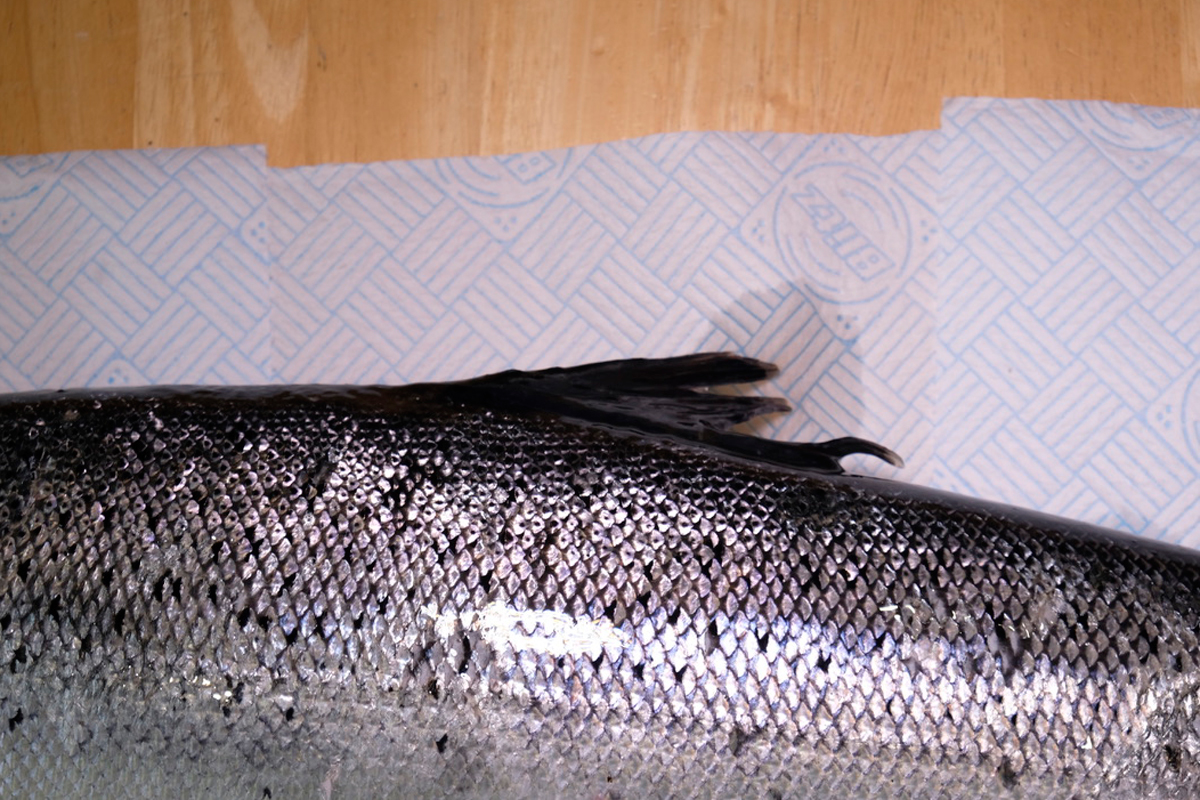 A ragged or deformed dorsal was a tell tale sign that this was a farmed salmon. This is not at all uncommon for farmed fish but rare in wild salmon 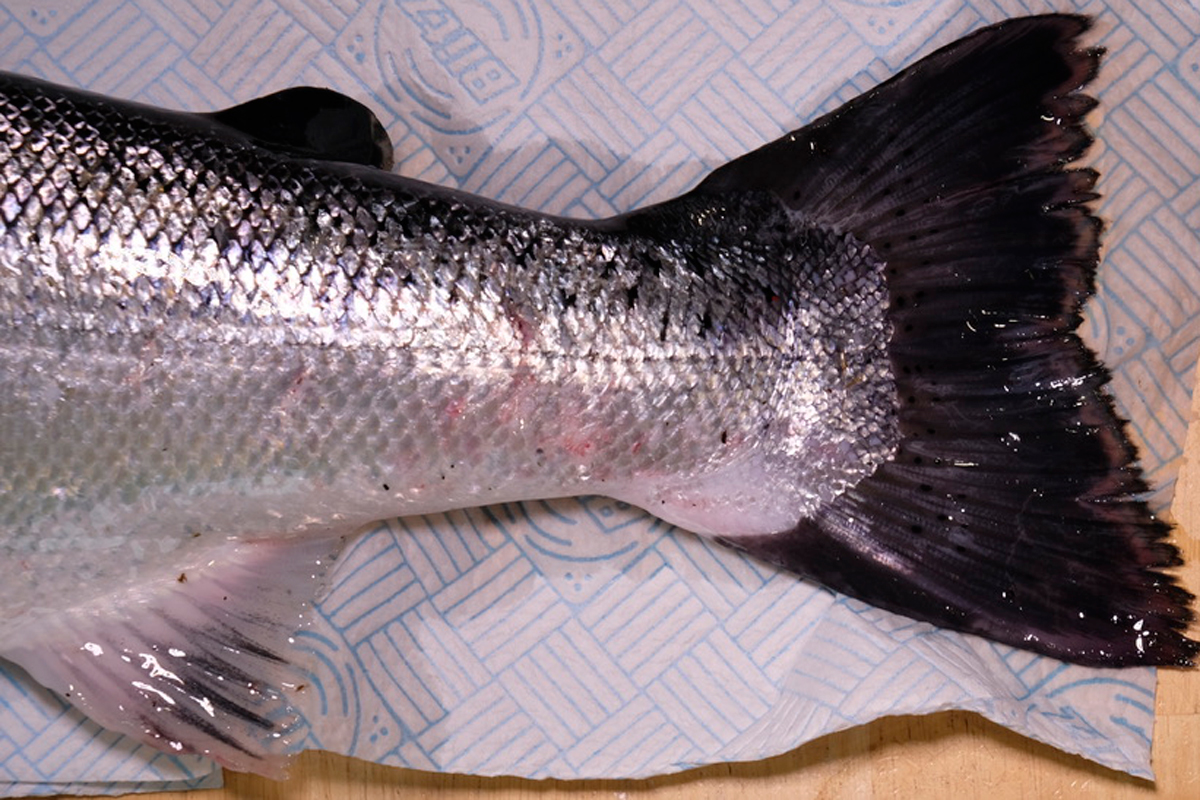 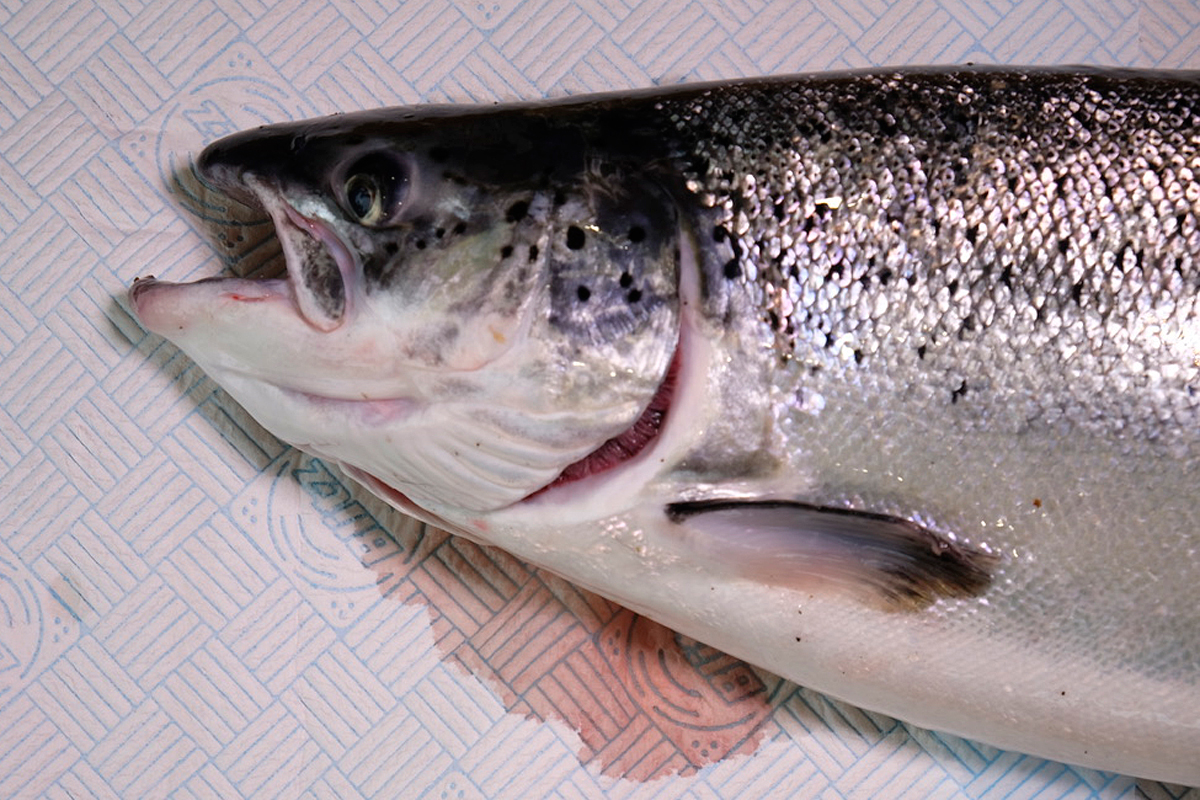 Another indication was the deformed tip to the pectoral fin. This wasn’t as obvious as on many farmed fish but looking closely and at all the other indicatiors, it was clearly not wild and was correctly killed.

The angler didn’t want the fish and we were pleased to take it and remove scale and tissue samples. It has now been consigned to the bin. We don’t recommend anglers eat farmed salmon they catch as they may be contaminated with residual chemicals and veterinary treatments.

The photos above illustrate the condition of the fish and show  what to look to tell wild and farmed fish apart. Most experience anglers should be able to distinguish between the two  but farmer salmon are getting improving these days and a damaged fin can easily be overlooked.

Most anglers don’t want to kill wild fish when they are in short supply so when presented with something like this, they err safety and I heard and saw pictures of another caught on the Doon today, that was returned rather than make a mistake. The same angler caught another and killed it as by this time he was  convinced it was an escapee. 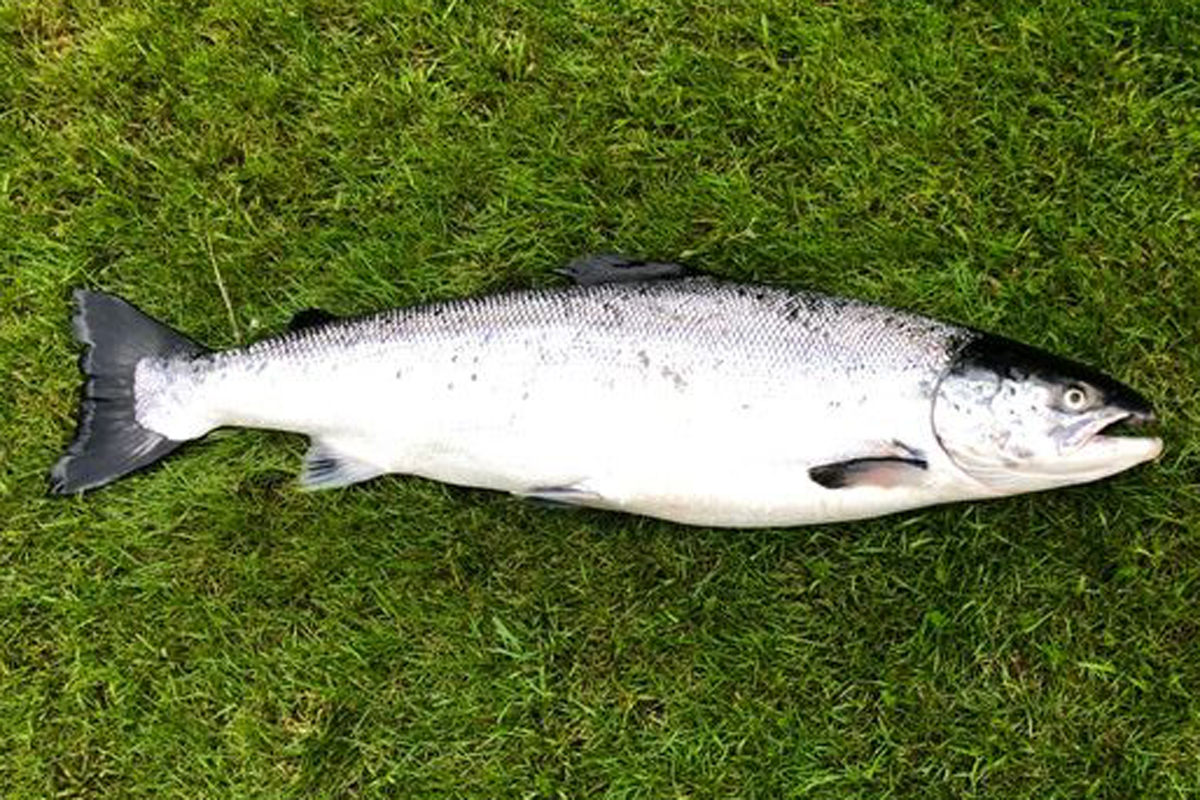 A Doon salmon that was thought to be an escapee and was correctly killed under the circumstances. Once scales reach Ayrshire Rivers Trust biologists, they should be able to confirm its provenance. It certainly looks an unusual salmon for the Doon from the image. 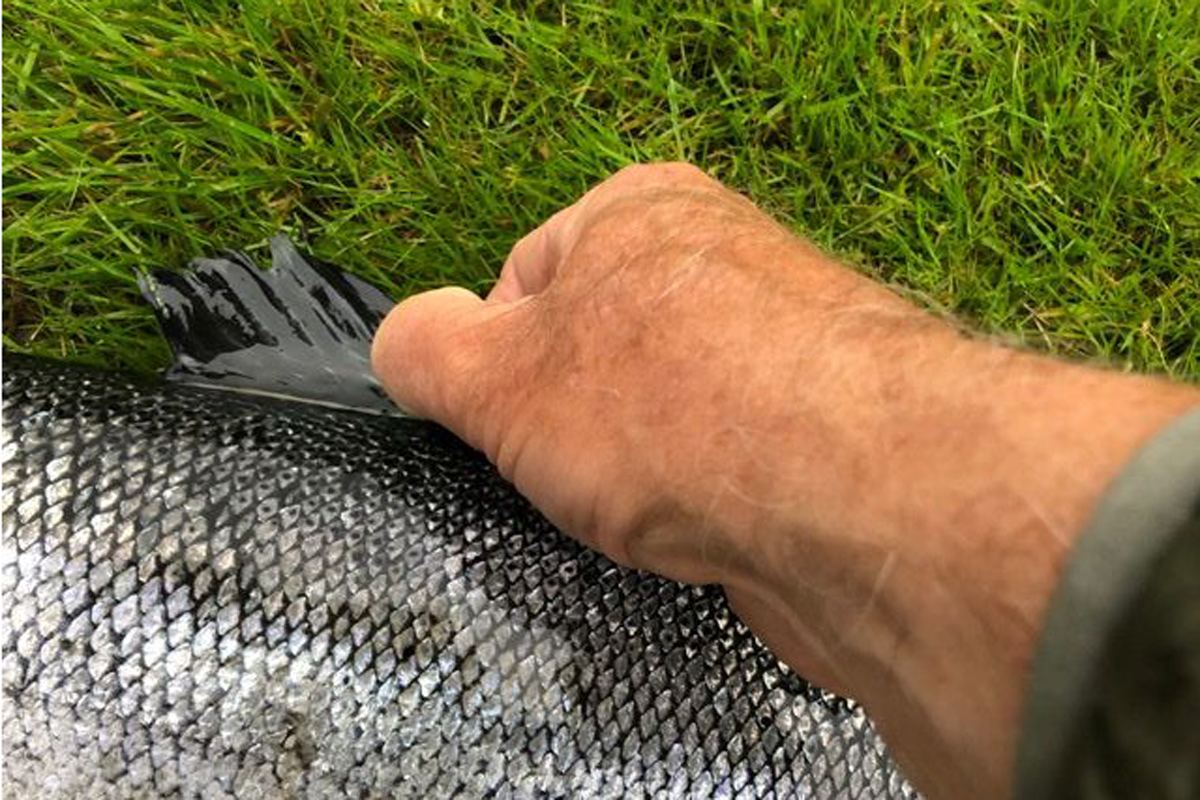 Closer inspection of the dorsal revealed a ragged and unnatural looking fin. This is typical of farmed salmon but they are getting better and you need to look closely in some cases

Hopefully these images will help other anglers distinguish between escaped farmed fish and wild salmon. We need the wild salmon to spawn successfully so they should be returned wherever possible and the farmers killed when captured.

All farmed fish must be reported to the Fish Health Inspectorate and the Doon DSFB and there’s a link to a form in the previous post that should be used for this. Photos and scale samples are requested from any farmed fish captured and they should be wrapped in kitchen roll and posted to Ayrshire Rivers Trust, 1 Gibbsyard, Auchincruive, Ayr KA6 5HW  for analysis. ART’s Biologists will provide you with their opinions on the fish’s life to the point of capture and send you an image illustrating the growth history throughout its life if you include your contact details. Please provide as much detail of the capture as possible along with the scales.

With another spate on the way today, there’s a very high probability that more of these escapees will enter the river as it drops. Keep a keen eye out for them please. They appear to be turning up more frequently in the last few days.