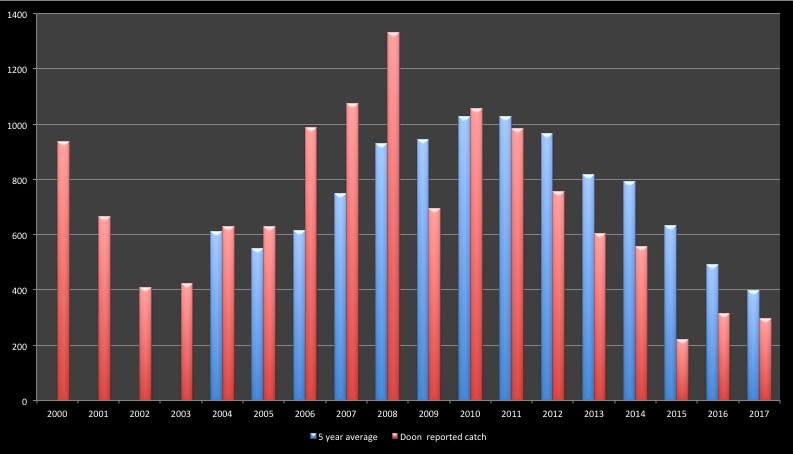 With the river proposed for downgrade to Category 2 status next season and an opportunity to respond to the consultation, ART have been looking at catch data provided to the DSFB  and to MSS. Theoretically, these catch reports should be identical and accurate each year but it doesn’t quite work out like that and that’s got to be a concern for the Board and MSS.

Comparing catch returns since 2013, ART calculate the mean average discrepancy over the 5 years to be 10.8%. That works out to be an error of 108 for every 1000 salmon caught ( just included to illustrate that 10.8% isn’t insignificant). Plotted on a chart, we can see how this breaks down: 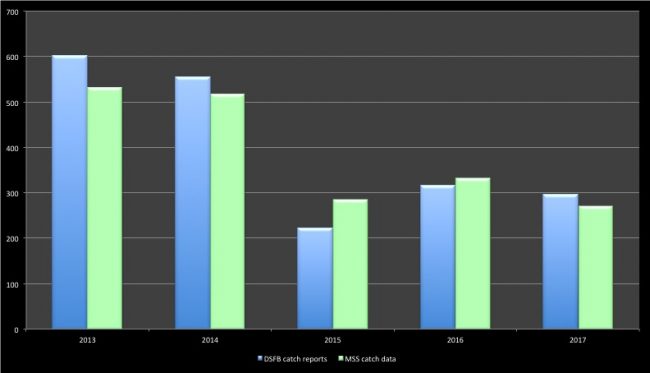 From the 2013 year we can see there a difference of 71 salmon that year. MMS lacks 71 salmon in their count that were reported to the DSFB but not them. We can only assume that some owners failed to submit returns or altered their submitted data or perhaps had late returns after their submission to MSS. Regardless, this illustrates the inaccuracy of basing anything on catch returns. In 2015 the situation is reversed and 63 (22%) more salmon were reported to MSS than the DSFB. This continued in 2016 with MSS counting 17 more salmon than the Board but again in 2017, the Board count exceeded MSS’s by 25 salmon.  These differences are disconcerting as we rely on the Government to set the correct category for our rivers and where there’s obvious errors occurring, it hardly inspires confidence. Obviously, both MSS and Board can only work with the data provided and that means the errors are likely to arise from owners and anglers failing to accurately record their catches. This must be improved.

Looking at the catch returns submitted to the Board since 2000, the trend is a clear of decline in rod catch. The 5 year average (used by MSS to calculate whether egg deposition will meet their targets) is included since 2004 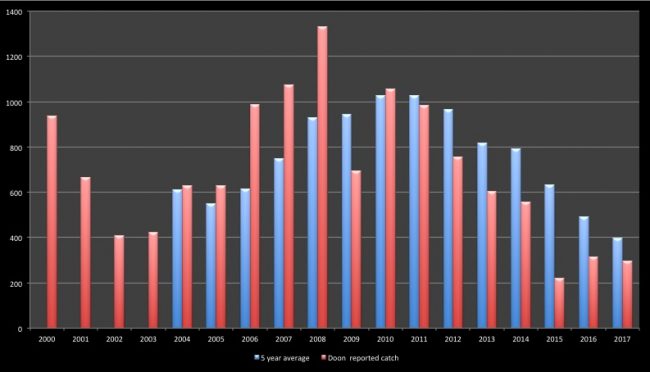 DSFB total catch data (salmon killed and released)  from anglers is in red while the 5 year average is in blue.

Based on the above catch data alone, one may speculate that an upturn may be about to happen soon but we already know 2018 has been a poor season. Once we receive this data, we will update this chart. We will also look out the juvenile statistics from 2012 to see how they compare to rod catches of returning adults. While linking productivity to returning adults would be incredibly useful in an ideal world, factors such as rainfall, run timings and angling effort all influence the rod catch but none more so than a decline in adult fish returning from the sea.

We are in a dark period for salmon across Ayrshire but none more so than on the Doon. Lets hope for an upturn soon.